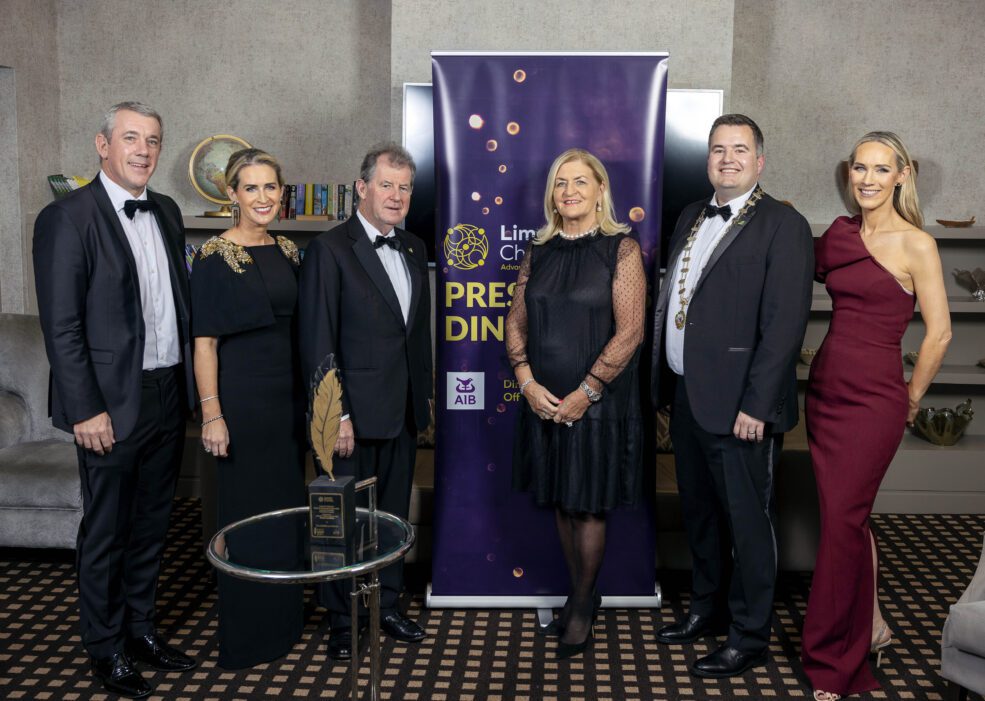 “If you have an idea, Limerick people will support you” – JP McManus

Philanthropist JP McManus paid tribute to his native city and county for its passion and pride as he received the Mid-West Regional Business community’s highest accolade, the Limerick Chamber President’s Award for 2022. 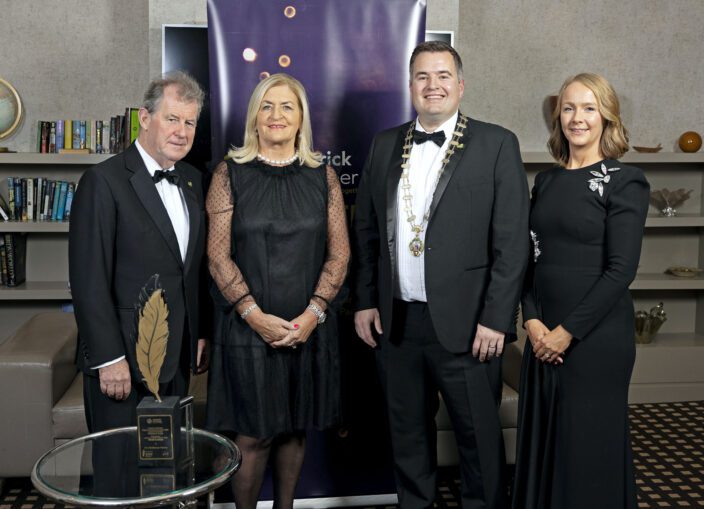 REPRO FREE
The Mid-West business community last night bestowed its highest award on businessman and philanthropist JP McManus as he was the recipient of the Limerick Chamber President’s Award for 2022. Photographed as he received the award were L-R JP McManus, Noreen McManus, Donal Cantillon, President of Limerick Chamber . Pic Arthur Ellis.

Some 400 attendees at the gala weekend event gave a standing ovation as the proud Limerick native became the latest recipient of the award at the Chamber’s first in-person ‘President’s Dinner and Mid-West Regional Business Awards’ since 2019. The President’s Dinner was sponsored by AIB and the awards were sponsored by TUS Midlands Midwest.  In addition to the President’s Award to JP McManus, nine other companies/organisations were recognised through the Regional Business Awards programme, with the ‘Business of the Year’ going to global medical devices company Stryker.

Receiving the President’s award, Mr. McManus said that it was recognition of the work of many, from his family to the legions across Limerick who support the events and organisations that he has been involved in. Mr. McManus said that Limerick and the region is “going in the right direction”, but emphasised that its future very much lies in, and is underpinned by, the quality of education.

“My family and I are just so proud to receive this award. It’s a really special night for us. But this is an award that’s really for a large number of people as you do not get anything done on your own. An example of this is all those who come out on Good Friday for the Team Limerick Clean Up, or all the other activities, from the golf pro-am to the scholarships, that I’m lucky to be involved in,” he said.

“Limerick people are very passionate about Limerick. Take our hurling team, for instance, even in the poor years, they always came out in force to support the team. You know, if you’ve an idea or a thought and they believe in it, you get great support for it in Limerick.”

Mr. McManus paid tribute to the region’s third level institutions for their impact on the region. “Limerick has so much to offer, not least in terms of talent for companies. When an organisation, be it a multinational or one of our own, is setting up in Ireland, the first thing they look at is what talent is available to them. We’re fortunate here in Limerick with our three third level institutions as they are really forward thinking, doing everything they can to bring investment into the region. The role of our universities is key to our future.”

He added: “My hopes are that we continue going in the direction we’re going. I think everybody is on the same hymn sheet here and we’re moving forward all the time.  So, what I say specifically to the business community tonight is continue doing the job you are doing. Our city and county are on the way up thanks to you.”

Mr. McManus was selected by Limerick Chamber President Donal Cantillon for his remarkable impact on the region, from his own business activity and investments, not least the impact of his stunning Adare Manor, chosen #1 Resort in the World by Conde Nast Traveler Reader’s Choice Awards 2022, to his many philanthropic enterprises.  These range from the ‘Team Limerick Clean-Up’, an annual county wide Good Friday spring clean initiative that has been embraced by the people of Limerick and replicated in other parts of Ireland, to the JP McManus Foundation and JP McManus Benevolent Fund, which have invested in not-for-profit organisations in education, healthcare and community initiatives, many of which support the most vulnerable people across Limerick and the Mid-West Region.

The tribute, Chamber President Donal Cantillon said, also acknowledged JP McManus’ contribution to a range of other activities and initiatives, from the JP McManus Pro-Am, which raises much-needed funds for those organisations, to his sponsorship of Limerick GAA, which is currently enjoying its golden era. His scholarships for hundreds of boys walking in his footsteps at his Sexton Street CBS alma mater was also singled out in the presentation of the award, along with the All-Ireland Scholarships, a third level education scholarship scheme covering the thirty-two counties of Ireland.

The Chamber President also cited Mr. McManus’ funding of the architecturally celebrated International Rugby Experience, a world-class visitor experience situated in the heart of Limerick city celebrating the game of rugby on a global scale. The much-anticipated opening of the visitor attraction takes place in early 2023.

Other factors included the securing of the 2027 Ryder Cup at Adare Manor, which will showcase the region and Ireland to the world, as well as JP’s horse racing interests and the Con & Annie Kirby Memorial Stakes at Limerick Greyhound Stadium – the richest juvenile dog race in the world, which is dedicated to the memory of his wife Noreen’s parents.

Presenting the award, Mr. Cantillon explained that the Chamber President award is presented each year to an individual or organisation that has made an outstanding contribution to the Mid-West region in either a business, community, cultural or sporting context. “We have had distinguished and worthy award recipients, many of whom are with us this evening, over the years but it is rare that anyone would tick all these boxes.  We all know about JP McManus’ generosity but what we equally know is that his generosity is matched by his humility, his modesty.  Therefore, an acknowledgement like this tonight will not sit comfortably with him but this is a long overdue award on behalf as the business community here.

“It’s difficult to sum up his contribution to Limerick and the wider region. Suffice to say that to say it is unrivalled for one person in terms of impact across his own business activities but also his social, community, healthcare and sporting donations sector.”